There may be worse to come 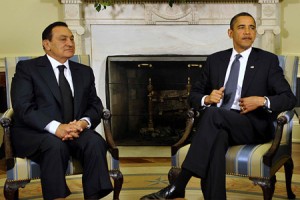 President Obama's naive efforts to appease the Arabs by bullying and distancing the United States from Israel has backfired. However despite increasing unease extending to some of Obama's most fervent supporters, the administration has yet to signal any change in policy.

The futility of trying to appease tyrannies is evident everywhere; the thuggish behavior of the Iranian regime toward its own people makes a farce of Obama's efforts to reason with Ahmadinejad; in response to unilateral US overtures to the Syrians, President Assad visited the Iranian president, congratulated him on his bogus reelection and declared that their alliance had never been stronger; the North Koreans displayed utter contempt for Obama's friendly outreach; Arabs states all responded negatively to Obama's entreaties to provide a few crumbs of recognition in return for Israeli concessions; Secretary of State Hillary Clinton was publicly humiliated by the Saudi Foreign Minister, who insisted there was nothing to negotiate unless Israel accepted all Arab demands.

The Palestinian response was even more noxious. Clearly emboldened, the Fatah General Assembly displayed contempt for any initiative that could further the peace process. Their intransigence again demonstrated the absurdity of the notion that this corrupt and duplicitous leadership could be a genuine peace partner. There were even elements of surrealism when the Fatah Assembly unanimously accused Israel of having assassinated Arafat and provided standing applause for a mass murderer.

They decreed that unless Israel acceded to all their demands, no further negotiations would take place and they could renew the "armed struggle." Far from encouraging Arab moderation, Obama's tough approach to Israel simply bolstered the hardliners.

The facts on the ground today make prospects for peace more remote than ever. The only clear message emerging from the Fatah Congress is that, as with Hamas, elimination of Jewish sovereignty in the region remains its ultimate objective. Were that not so, Mahmoud Abbas would have accepted Ehud Olmert's offer, which virtually granted him all his territorial demands and even hinted at a compromise over the Arab right of return.

Obama's advisers must have been bitterly disappointed when their diktats against Israel backfired. Indeed, their one-sided demands and bullying tactics can take credit for having created a rare consensus among the Israeli public, which today overwhelmingly supports Netanyahu.

To add to Obama's problems and despite predictions to the contrary, American Jewish leaders have begun to openly challenge some of his policies. There is a growing unease even among some Jewish Democrats that Obama is betraying the unequivocal undertakings he made during the elections to faithfully preserve the alliance with Israel.

This was exemplified in remarks made by Howard Berman, the influential Democratic chair of the US House of Representatives Foreign Affairs Committee, who in a closed meeting with Jewish leaders explicitly criticized the Obama administration's pressure on Israel over settlements. Berman said Abbas was now "waiting for the US to present him Israel on a platter". Stanley Hoyer, the Democratic House majority leader visiting Israel, made similar comments at a Jerusalem news conference.

OBAMA MUST also have been stunned when his friend and loyal supporter Alan Solow, the Chairman of the Presidents Conference representing 52 major American Jewish organizations, condemned his demands to limit Jews settlements in Jerusalem and its suburbs.

In a full page New York Times advert Abe Foxman of the Anti Defamation League stated "The problem is not settlements, it's Arab rejection...Mr. President, it's time to stop pressuring our vital friend and ally". David Harris of the American Jewish Committee expressed similar feelings to a Congressional group. Whilst usually ritually reiterating their belief that Obama would not abandon Israel, Jewish leaders have begun openly criticizing the administration's behavior toward the Jewish state.

Obama's standing with American Jewish activists plummeted further when, contemptuously dismissing a rare virtually unanimous Jewish protest, he personally participated in the ceremony honoring former Irish president and 2001 UN Durban hate-fest convener Mary Robinson with the highest human rights award in the US. This was perceived as yet another manifestation of Obama's new love affair with the UN and its anti-Israel affiliates.

It must also have been disappointing for Obama's Jewish advisers promoting the J Street line when they became aware that despite expensive media promotions, opinion polls indicated that most Jewish activists remained contemptuous of the left-wing Jewish fringe groups urging Obama to force Israel to make further concessions.

However, as of now, while continuing to avoid any initiative which could irritate the Arabs, the US is maintaining its heavy-handed approach toward its erstwhile ally, Israel. While a face-saving compromise may soon eventuate, appreciating the unprecedented backing he currently enjoys from his constituency, Netanyahu would be unwise to capitulate to Obama's demands.

Alas, irrespective of the settlement issues, there may be worse to come from this administration. After Egyptian President Hosni Mubarak's recent warm meeting with Obama in Washington, he effusively praised the policy changes introduced by the president and hinted of further impending "positive" US initiatives.

There are also chilling predictions that without prior consultations with Israel, Obama intends to unilaterally submit a US plan for a comprehensive settlement at the UN or elsewhere. It is rumored that this plan would use as a starting point the irresponsible offers made to Abbas by Olmert during the death throes of his tenure - offers which would unquestionably have been repudiated by the Knesset and people of Israel in a referendum. Such a move would be an unprecedented betrayal of a long-standing ally.

UNTIL SUCH time as a genuine Palestinian peace partner emerges, Prime Minister Binyamin Netanyahu cannot be expected to create a miraculous magic plan which would bring about a comprehensive final settlement. But his task now must be to preempt a disastrous imposed settlement by the Americans.

In doing so he must he speedily identify the red lines which his government, backed by the vast majority of Israelis, would never contemplate crossing.

To this end he should also marshal the support of the mainstream American Jewish leadership and encourage them to convey to their president that they too have red lines. They have already begun to signal that they will not remain passive if their government attempts to unilaterally impose a solution which could endanger the Jewish state.

Tower of Babble: How the United Nations Has Fueled Global Chaos (Paperback) by Dore Gold