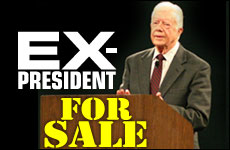 I have known Jimmy Carter for more than 30 years. I first met him in the spring of 1976 when, as a relatively unknown candidate for president, he sent me a handwritten letter asking for my help in his campaign on issues of crime and justice. I had just published an article in The New York Times Magazine on sentencing reform, and he expressed interest in my ideas and asked me to come up with additional ones for his campaign. Shortly thereafter, my former student Stuart Eisenstadt, brought Carter to Harvard to meet with some faculty members, me among them. I immediately liked Jimmy Carter and saw him as a man of integrity and principle. I signed on to his campaign and worked very hard for his election. When Newsweek magazine asked his campaign for the names of people on whom Carter relied for advice, my name was among those given out. I continued to work for Carter over the years, most recently I met him in Jerusalem a year ago, and we briefly discussed the Mid-East. Though I disagreed with some of his points, I continued to believe that he was making them out of a deep commitment to principle and to human rights.

Recent disclosures of Carter's extensive financial connections to Arab oil money, particularly from Saudi Arabia, had deeply shaken my belief in his integrity. When I was first told that he received a monetary reward in the name of Shiekh Zayed bin Sultan Al Nahayan, and kept the money, even after Harvard returned money from the same source because of its anti-Semitic history, I simply did not believe it. How could a man of such apparent integrity enrich himself with dirty money from so dirty a source?

And let there be no mistake about how dirty the Zayed Foundation is. I know because I was involved, in a small way, in helping to persuade Harvard University to return more than $2 million that the financially strapped Divinity School received from this source. Initially I was reluctant to put pressure on Harvard to turn back money for the Divinity School, but then a student at the Divinity School -- Rachael Lea Fish -- showed me the facts They were staggering. I was amazed that in the 21st century there were still foundations that espoused these views. The Zayed Centre for Coordination and Follow-up - a think-tank funded by the Shiekh and run by his son - hosted speakers who called Jews "the enemies of all nations," attributed the assassination of John Kennedy to Israel and the Mossad and the 9/11 attacks to the United States' own military, and stated that the Holocaust was a "fable." (They also hosted a speech by Jimmy Carter.) To its credit, Harvard turned the money back. To his discredit, Carter did not.

Jimmy Carter was, of course, aware of Harvard's decision, since it was highly publicized. Yet he kept the money. Indeed, this is what he said in accepting the funds: "This award has special significance for me because it is named for my personal friend, Sheik Zayed bin Sultan al-Nahyan." Carter's personal friend, it turns out, was an unredeemable anti-Semite and all-around bigot.

The extent of Carter's financial support from, and even dependence on, dirty money is still not fully known. What we do know is deeply troubling. Carter and his Center have accepted millions of dollars from suspect sources, beginning with the bail-out of the Carter family peanut business in the late 1970s by BCCI, a now-defunct and virulently anti-Israeli bank indirectly controlled by the Saudi Royal family, and among whose principal investors is Carter's friend, Sheikh Zayed. Agha Hasan Abedi, the founder of the bank, gave Carter "$500,000 to help the former presidentestablish his center...[and] more than $10 million to Mr. Carter's different projects." Carter gladly accepted themoney, though Abedi had called his bank-ostensibly the source of his funding-"the best way to fight the evil influence of the Zionists." BCCI isn't the only source: Saudi King Fahd contributed millions to the Carter Center- "in 1993 alone...$7.6 million" as have other members of the Saudi Royal Family. Carter also received a million dollar pledge from the Saudi-based bin Laden family, as well as a personal $500,000 environmental award named for Sheikh Zayed, and paid for by the Prime Minister of the United Arab Emirates.

It's worth noting that, despite the influx of Saudi money funding the Carter Center, and despite the Saudi Arabian government's myriad human rights abuses, the Carter Center's Human Rights program has no activity whatever in Saudi Arabia. The Saudis have apparently bought his silence for a steep price. The bought quality of the Center's activities becomes even more clear, however, when reviewing the Center's human rights activities in other countries: essentially no human rights activities in China or in North Korea, or in Iran, Iraq, the Sudan, or Syria, but activity regarding Israel and its alleged abuses, according to the Center's website

The Carter Center's mission statement claims that "The Center is nonpartisan and acts as a neutral party in dispute resolution activities." How can that be, given that its coffers are full of Arab money, and that its focus is away from significant Arab abuses and on Israel's far lessserious ones?

No reasonable person can dispute therefore that Jimmy Carter has been and remains dependent on Arab oil money, particularly from Saudi Arabia. Does this mean that Carter has necessarily been influenced in his thinking about the Middle East by receipt of such enormous amounts of money? Ask Carter. The entire premise of his criticism of Jewish influence on American foreign policy is that money talks. It is Carter-not me-who has made the point that if politicians receive money from Jewish sources, then they are not free to decide issues regarding the Middle East for themselves. It is Carter, not me, who has argued that distinguished reporters cannot honestly report on the Middle East because they are being paid by Jewish money. So, by Carter's own standards, it would be almost economically "suicidal" for Carter "to espouse a balanced position between Israel and Palestine."

By Carter's own standards, therefore, his views on the Middle East must be discounted. It is certainly possible that he now believes them. Money, particularly large amounts of money, has a way of persuading people to a particular position. It would not surprise me if Carter, having received so much Arab money, is now honestly committed to their cause. But his failure to disclose the extent of his financial dependence on Arab money, and the absence of any self reflection on whether the receipt of this money has unduly influenced his views, is a form of deception bordering on corruption.

I have met cigarette lobbyists, who are supported by the cigarette industry, and who have come to believe honestly that cigarettes are merely a safe form of adult recreation, that cigarettes are not addicting and that the cigarette industry is really trying to persuade children not to smoke. These people are fooling themselves (or fooling us into believing that they are fooling themselves) just as Jimmy Carter is fooling himself (or persuading us to believe that he is fooling himself).

If money determines political and public views-as Carter insists "Jewish money" does-then Carter's views on the Middle East must be deemed to have been influenced by the vast sums of Arab money he has received. If he who pays the piper calls the tune, then Carter's off-key tunes have been called by his Saudi Arabian paymasters. It pains me to say this, but I now believe that there is no person in American public life today who has a lower ratio of real to apparent integrity than Jimmy Carter. The public perception of his integrity is extraordinarily high. His real integrity, it now turns out, is extraordinarily low. He is no better than so many former American politicians who, after leaving public life, sell themselves to the highest bidder and become lobbyists for despicable causes. That is now Jimmy Carter's sad legacy.

Carter Busted!! but... As the pea nut farmer al'carter has already been around the globe {in Ireland Now} spruking his anti zionist stuff on behalf of the arab and muslim world has the damage already been done?